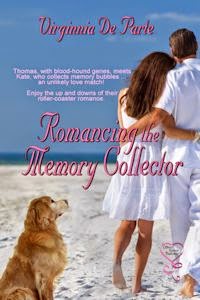 The moment she put her foot down, she regretted it. The moving plate of the escalator pushed her backward, and she tumbled over her suitcase, arms flailing, her shoulder bag swinging around and hitting her in the face.


God, she hated being short sighted.


Vanity, utter vanity, stopped her from wearing her glasses in public. At least with them on she would have noticed people coming toward her. Fellow travellers now staggered around her as she waited for the ringing in her ears to stop and the sting in her cheek to ease. Some uttered apologies as they stepped over or around her. A suitcase caught her ankle, clipping it with a nasty crack before the owner apologised and lifted it clear.


She sniffed back tears, before crawling out of the way. She fumbled in her handbag for her damn spectacles that looked like the bottom of two wine bottles when she put them on. They enlarged her eyes until they looked like those of a frog. She’d grown up to the taunts of “googly-eye.” Today’s experience might cure her vanity because her present position verged on the ridiculous, baggage and legs strewn about, creating a traffic hazard.


“Sit,” a voice commanded. Surely the man couldn’t mean her?


She wanted to shout, ‘What do you think I’m doing?’ but at that moment a firm hand rested on her shoulder and a voice, as warm as a chocolate liqueur sliding down her throat, asked, “Are you all right, miss? Here, let me help you up.” She gave up looking for her glasses.


With one hand in her bag, and the other reaching out for the handle of her case, she couldn’t refuse the offer. The man cupped her elbow, put an arm around her waist, and lifted her slowly to her feet. He held her until she steadied. Gratitude flooded her, tears welled and she sniffed again, unable to spare a hand to find her handkerchief. A large soft white cloth appeared under her nose and she grabbed it, grateful to be able to wipe her nose and cheeks. It smelled of pine trees after the rain. Without thinking she put it in her sleeve.


“Thank you so much,” she said. “I’m sorry I’ve caused a traffic jam, it’s just I don’t see very well.” What an understatement. She peered at his shape in front of her. Then, realising she was frowning, she straightened her back and smiled. “I really should wear my glasses.” She gestured to where she thought her suitcase might be. “If you could pass me my case I’ll be on my way. Obviously the next escalator is the down one. Silly me.”


Chocolate Voice moved to the side and disappeared, coming back a moment later. She could hear the wonky wheel of her suitcase. “Oh you’ve found it. Great.” She reached to take the handle. It didn’t arrive.


“The down escalator is around the end of the balustrade. This end has two lots of stairs coming up, one moving, the other stationary.”


God, she would have done the same thing all over again, probably falling down the staircase face first if she’d tried the next lot of steps. “Hell’s teeth,” she murmured, still reaching out, her hand waving about seeking her suitcase.


The man’s warm grasp stilled her arm. “I think it might be a good idea if I take your case and go with you down the escalator to the exit. Would you like a taxi or are you catching a bus?”


Bliss—someone prepared to rescue her, guide her to the exit, and find a taxi. Could the airport be hiring porters now? While he grasped her hand, she decided, she might as well introduce herself. His grip hadn’t lessened one bit. “You’re very kind.” She shook his hand. “I’m Kate, Kate Bentley. And you are?”


“Are you a porter? I see you have a uniform of some sort.” She touched the gold bands just visible on his sleeve ends.


He laughed, a rolling sort of chuckle, like runny honey dripping down the side of a bowl. “I might as well be, but no, I’m a Customs Officer, Miss Bentley. It is ‘Miss’ isn’t it? One can never tell these days. My apologies if I’m wrong, but you’re not wearing a wedding ring.”


“It’s definitely ‘Miss’, Mr. Winters. And I can’t say how grateful I am. I’m very short sighted. I like to pretend I’m not and today I’m paying for my pride.” What was it about this man that had her telling him her most private feelings? He smelled nice too, although he had a slight doggy odour around him.


By now, with a firm grip of her elbow and a gentle tug he indicated she should walk beside him. Head high, she complied, putting behind her the spectacle she must have made of herself a few moments earlier. At least being short sighted, she never saw the amusement on the faces of people watching—if they were amused, of course. Most hurried past. Sometimes she felt as if she had a case of leprosy, rather than near blindness!


Thank heavens for Thomas Winters, a cold name for such a warm voice.

'A STELLAR AFFAIR' - BOOK FOUR OF 'THE FUTURE MOVERS' SERIES 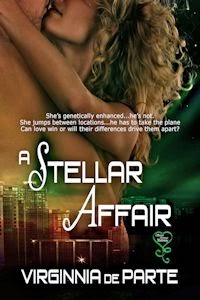 She refused his offer to order a dessert and requested a coffee instead. Her feet wanted to dance outside, take his hand and stroll along the riverside, but she sat demurely, watching him eat a slice of ‘death by chocolate’ and wondered at how attractive his chin looked, his jaw line strong and firm and his neat tucked-flat ears. Her grandfather’s ears were quite large in comparison.
“Matt Saunders. Good to see you in Melbourne.” A man had stopped by their table, arriving from behind her. Dressed in a black dinner jacket and bow-tie, rather portly, he carried an air of authority. She watched as Matt looked up, saw the gentleman, stood and grasped the outstretched hand in greeting.
“Minister, Phillip, what a pleasant surprise.”
“Are you here for the conference on the latest mining developments, Matt?” The man glanced at Stella, “Or purely social engagements?” His eyebrows raised and his smirk inferred more than a dinner date.
“A bit of both, Minister.” Matt turned and gestured to Stella. “This is Stella Corban. Stella, this is Phillip Carruthers, Minister of Defense.”
She thought her heart would stop right then and there. She smiled her brightest, despite the icy ripple that ran down her spine raising the fine hairs on back of her neck. The Minister of Defense! The man who ordered the continued breeding of g-altered babies, his excuse being their talents could defend the country. The man who, with a flick of his fingers, could incarcerate her for life. The one man her family despised with a passion and now she had to shake his hand. To refuse would only draw attention to herself.
“How do you do?” she said, rising slightly from her chair. He held her hand for a moment longer than necessary, appraising her. There was an odour of lecherousness about him and she avoided eye contact, hoping to appear as a mindless companion, mere dressing on a business-man’s arm. She sat, immediately he released her hand. She sipped her coffee and turned from them to look through the nearby windows to the safety of the outside world, desperate to leave yet frozen to the spot with fright. Some murmured comments followed and a few moments later the man moved off.
“Stella, you’re pale, almost white. Is something the matter?” Matt leaned forward and grasped her hand, “And you are trembling.”
The stroke of his fingers, like hot embers running over her hand, didn’t warm her. She had to get her panic under control. “It’s been a long day. I’m a little tired. Perhaps we could take that walk soon.”

' A TALENT FOR LOVING:' BOOK THREE OF 'THE FUTURE MOVERS' SERIES 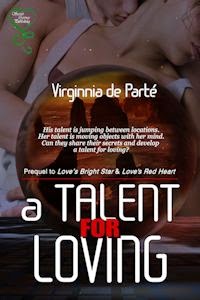 
There it was again.
A tickling on the edge of her safety net. She always put her confusion barrier up when in the city.  Anyone wanting to approach her would be stifled at five paces away, their decision to approach would waver and hopefully they would give up their effort.  Any other pedestrian, not concerned or not noticing her would walk right on through it.  It was a handy device that kept her safe and a secret she shared that put her mother’s mind at rest.
Besides, you never knew when someone from the ‘Nursery’ might be checking up on your life.  Cursed people.  Thank God she’d escaped, been adopted by loving indulgent parents and was managing to live her life to the fullest
The sensation tickled her back again and she stopped mid-stride, turned and looked down the street.  There he was again, the same young man who’d stared at her in the supermarket the other day while she’d been shopping with her mother. He had to be about her own age - too young to be a government agent. What did he want from her?  Probably some creep who stalked people, unless it was a co-incidence? Could he be g-altered too?
Did he recognise her from the Nursery?  The children had mixed socially when they were growing up until the magic age of seven. Any friendships formed were then split asunder as some stayed, some were adopted and some seemed to vanish overnight. His face didn’t ring any bells in her memory. Had he been adopted as well? To be out in the world he must have. Those ‘conscripted’ didn’t enjoy the luxury of free will.

She ran her gaze slowly over him, taking in his tall frame, broad shoulders and thick, dark hair.  He met her gaze with equal interest before she turned and walked on. She could feel his indecision prickling again behind her. If he really wanted to talk to her then her confusion barrier would be stopping him.  A smile tugged at the corner of her mouth. She could feel his puzzled thoughts bouncing off her barrier, as other pedestrians streamed past close to her and wove between them. No doubt he couldn’t work out how they could get close to her and he couldn’t.
She wondered if he’d work out how break through the barrier. No one else had so far. It wasn’t that she was against men or found the opposite sex unattractive. It was simply a matter of safety first. On reaching the corner she took the steps into the train station at a run, glad to be out of the wind and stopped to read the digital notice board’s moving message.  There was a ten minute wait till her next train on Platform three. Should she get a coffee to sip on the train?  She checked her barrier, no tickling, no irritation. He must have given up, or moved away.  Pity, obviously no stickability. He’d looked rather nice too. Ah well, he might try again and she just might let him approach next time.